The internet has become an integral component of the modern human experience. The majority of us use the internet for everything from socializing to working to entertaining ourselves, and the role it plays in our lives is always growing.

The growth trajectory of the internet has been incredible. The World Wide Web was first made publicly available in 1991. It had, quite literally, a handful of active users. Today, more than half the world’s population uses it.

There are many fascinating internet statistics to explore. This article will answer some of the most common questions you may have about internet access, internet traffic, eCommerce, social media, and everything else about the internet.

Internet Statistics – At a Glance

The article below will explore hundreds of fascinating figures and statistics. Below, you will find dedicated sections covering stats on internet users, devices, online shopping, social media, digital advertising, and much more.

If you’re just looking for some highlights, here are some of the most noteworthy statistics you should know:

Internet Population Statistics: How Many People are Internet Users?

As of July 2020, there were over 4.57 billion active internet users. Compare this to the world population of more than 7.8 billion, and we can see the scale of the internet’s effect on our societies.

Today, more than 58% of humans are active internet users. And remember, this figure includes babies, toddlers, young children, the elderly, and the hundreds of millions who have no access to technology at all.

This figure is rapidly growing on a daily basis. An in-depth report indicated that there were 4.33 billion active internet users in 2019. Less than one year later, the figure was 4.57 billion. That means that more than 240 million people were introduced to the internet in the last year alone.

That same report indicates that the per-year growth rate of new internet users is around 8%. The number of internet users is growing at approximately 8x the rate of the total population growth, as technology becomes more affordable and accessible for a wider range of people. 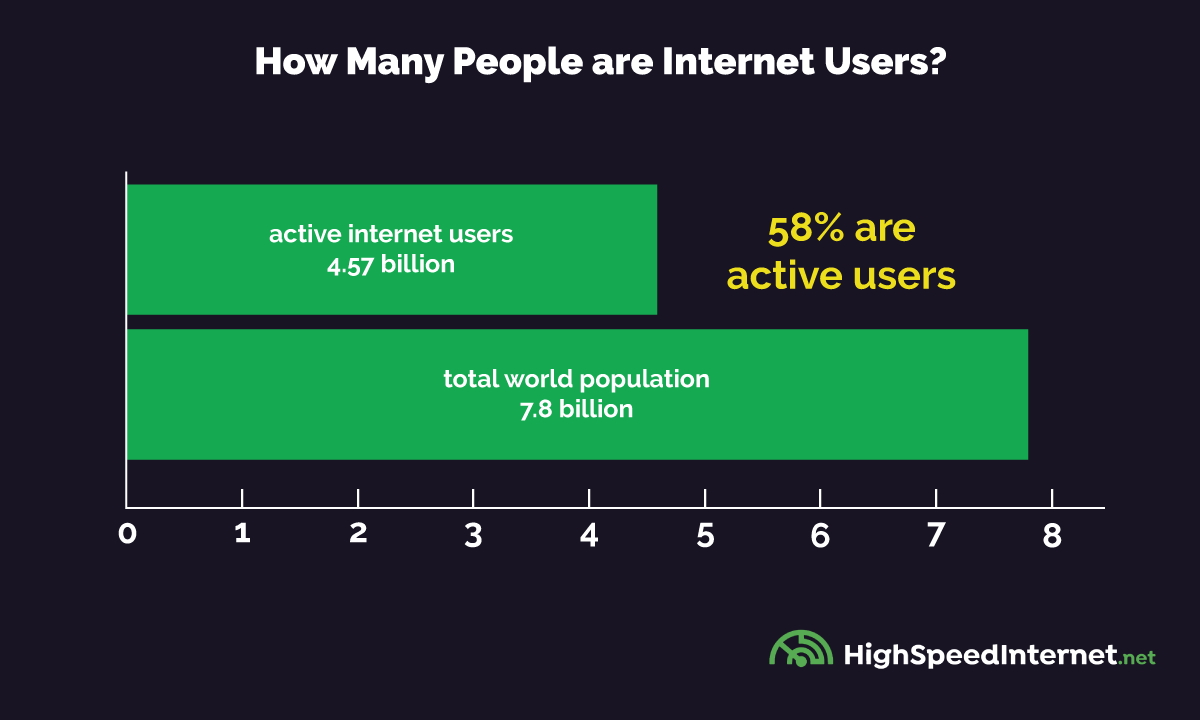 The percentage of people with internet access is far higher in more developed countries. For example, in the United States, roughly 81% of the population uses the internet on a daily basis, according to Pew Research, and more than 91% of Americans have access to the internet. Stats in the United Kingdom, Canada, South Korea, and other highly developed nations are similar.

Then again, due to the large populations of many Asian countries, the vast majority of internet users reside in Asia. China alone has more than 850 million internet users, more than 2.5x the total population of the United States.

Here is the internet penetration rate (which shows what percentage of the population has access to the internet): 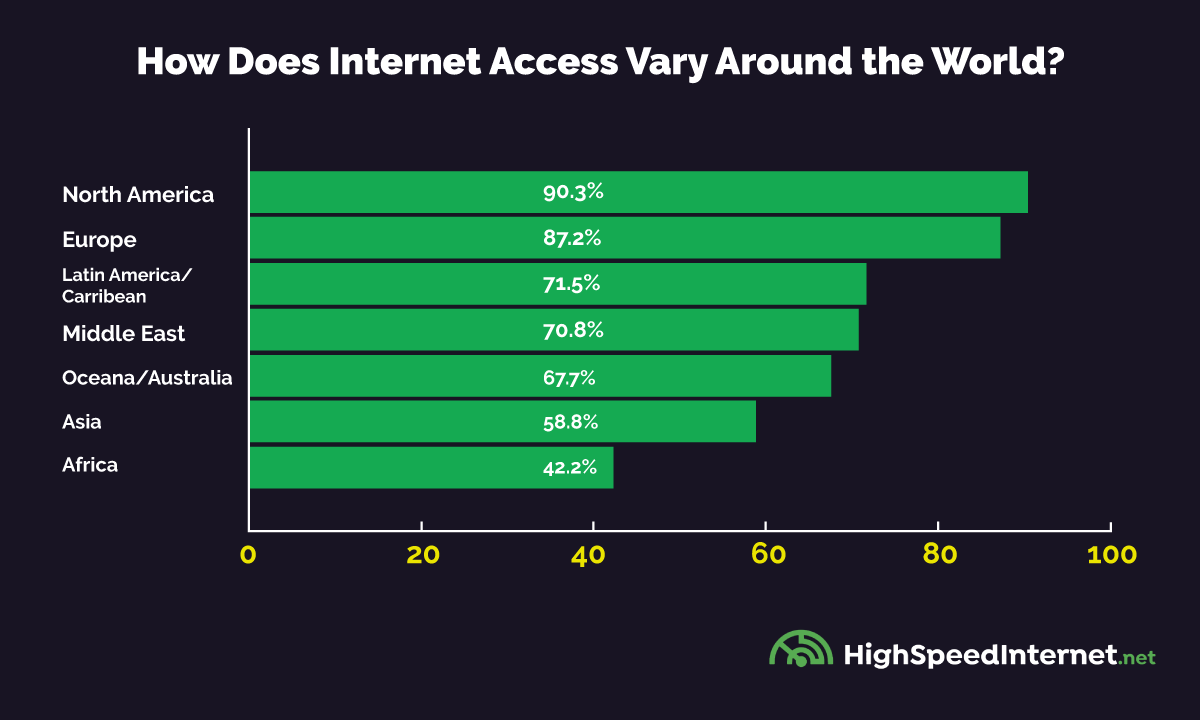 Internet Usage Statistics: How Much Time Do People Spend on the Internet?

In 2019, the average active internet user spent a whopping 6.5 hours online every day. Keep in mind that this figure includes all time spent online, including during working hours.

Even so, the figure is staggering. We spend more time on the internet than we do on just about any activity, apart from sleeping. What kind of effect might this be having on our societies?

The internet can certainly contribute to some of society’s problems. For example, rates of anxiety disorders in children and teens are growing rapidly, and some experts point to social media as a root cause.

On the other hand, the internet appears to have a net-positive effect on the global population as a whole. Several prominent studies have shown a positive correlation between access to the internet and personal happiness and satisfaction. Researchers found that having internet access empowered individuals, giving them a better sense of security, influence, and personal freedom.

The internet can be accessed via desktops, laptops, tablets, smartphones, and specialty electronics like smart TVs and even vehicles. Internet usage trends (such as the specific internet activities people engage in) vary significantly depending on the device used to access the web. Smartphone users, for instance, tend to spend more time inside apps, while desktop users spend the most time in web browsers.

Today, the majority of internet users access the web via mobile devices. Approximately 50.6% of overall web traffic originates on mobile devices (mobile phones, for the most part), while desktop and laptop account for about 45.5%. The remainder comes from tablets, at only 3.75%.

This is largely due to the affordable nature of mobile phones. Smartphones also improve internet access because they communicate with the web via a cell network, rather than WiFi or a wired internet connection, which is less accessible in developing nations.

Mobile devices from Apple and Android have made it easier, and cheaper, for citizens of developing countries to come online. Meanwhile, mobile apps have made internet content even more engaging, allowing us to interact with the internet wherever we are.

Internet browsers are how most of us access the internet. Market share is split between many competitors but dominated by just a few.

Here’s a breakdown of the internet browser market share:

The data above refers to data from desktop and laptop use.

For mobile phones, here’s the breakdown:

As you can see, Safari commands a much higher percentage of mobile browser market share, thanks to the popularity of Apple iPhones.

While we may think of the internet as something that is primarily accessed on desktop computers, this is no longer the case. Increasingly, more and more people are using mobile devices to access the internet. Here are some interesting mobile internet stats and mobile search statistics.

When faced with a problem or a question, most of us pull out our phones and search the web for it immediately. While there are many ways to search, Google is by far the dominant search engine. Here are some interesting web search statistics.

A huge part of the internet is websites we access daily for information, communication, and entertainment. But how many websites are there?

Today, social media platforms make up a huge part of what we refer to as “the internet”. Social networks like Facebook, Instagram, Twitter, and Snapchat are playing an increasingly large role in all of our lives. Here are some interesting social media statistics.

The Internet of Things, or IoT, is a term that refers to a network of physical devices that use technology (such as sensors or software) that allow them to connect and exchange information with one another. Examples of the Internet of Things include Smart Home systems, advanced factory manufacturing systems, and more.

Internet of Things is becoming increasingly more important in our daily lives, as well as in the global economy. The technology is being used in households, hospitals, factories, and even in fields of crops. Here are some interesting statistics about IoT:

Internet of Things in the Home

Smart Home devices make up the majority of consumer-facing IoT technologies. Smart assistant tech like Amazon Alexa, Google Assistant, Siri, etc. have made it easy for consumers to integrate various IoT tech into their homes.

Internet of Things in Industry & Business

The bulk of IoT spending and integration takes place in the industrial world. This includes the use of industrial robots, smart manufacturing technologies, autonomous drones, wearable IoT tech, advanced sensor devices, and much more. Manufacturers, utility companies, and construction firms are among the most aggressive in implementing IoT technology.

Internet of Things in Healthcare

Healthcare is another industry that is rapidly adopting IoT technology to improve efficiencies and patient outcomes. Hospitals are implementing smart patient monitors, AI-enabled imaging devices, and more. In healthcare, IoT technology has the potential to take the pressure off of medical staff, by allowing technology to assist in the monitoring of patient vitals and other key measurements.

Internet of Things in Agriculture

Agriculture, or farming, doesn’t seem like it should be a high-tech industry. However, with the massive scale of modern agriculture, today’s farms are becoming increasingly automated and “smart”. IoT is helping farmers gather key data about their crops, such as moisture levels, disease prevalence, and even soil health and nutrient content. Agriculture giants now use smart sensors spread throughout their fields, as well as autonomous drones to survey huge areas of cropland. Researchers hope that IoT technology can help increase yields, reduce water and fertilizer use, and improve efficiencies to help agriculture keep up with the earth’s growing population.

The internet has become a powerful tool for businesses to reach new customers. Paid online advertising, in particular, has become all but essential for modern businesses. Today, the majority of companies pay for some form of digital advertising, on channels including social media and paid search ads. And, as consumers, we are faced with what seems like hundreds of advertisements on a daily basis. Here are some interesting internet advertising statistics.

Online shopping is becoming so popular that it can really just be called “shopping”. Apart from staples like groceries, most people in wealthy countries now take to the internet often to purchase goods and services. Here are some interesting eCommerce statistics.

The Internet & The Economy

Some of the most interesting internet statistics relate to its vital relationship with the global economy. The internet is involved in just about every aspect of the modern economy, from direct sales to communication to the way in which most workers do their jobs.

Take eCommerce sales, for example. eCommerce makes up over 15% of the total retail sales in the United States, and the figure is growing rapidly.

As more and more business activity moves online, largely to online retailers such as Amazon and eBay, eCommerce sales are becoming even more important to the overall economy. The ratio of retail e-commerce sales is a closely watched figure among economists and business analysts.

The Future of the Internet

The internet has fundamentally changed our lives. It’s been around for about 50 years – although its use has only been widespread for around half that time. It’s difficult to say what the internet may look like in the future, but it’s a fascinating question to ponder.

In 2019, the Pew Research Center surveyed a number of technology experts, asking them what the future of the tech world may be like. Most were optimistic, noting that the internet has the power to help us work less, collaborate and communicate more seamlessly, and even live longer.

In the future, the internet will likely unlock new ways to communicate, allow us to track our own health data more accurately, and potentially completely transform the way we work and live. It could change a lot about our lives for the better – but there are also substantial risks.

If the right policies and public attitudes are not implemented, the internet could also cause negative changes. A reduction in privacy, a growing dependence on technology, and worsening economic inequality are just a few of the concerns policymakers must keep in mind as they seek to regulate the internet.

While the true future of the internet is impossible to predict, suffice it to say that the online world is here to say – and it’s only bound to become an even more integral part of our lives.